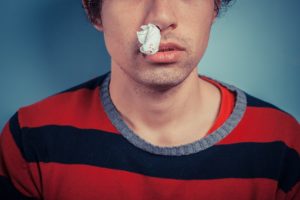 Nosebleeds are alarming. They often accompany trauma, and the sight of blood flowing down your face does not usually help the situation. Fortunately, nosebleeds are typically not nearly as serious as they originally seem.

More than 90 percent of all nosebleeds are anterior, meaning the bleeding comes from the blood vessels in the front part of the nose. Trauma to the inside or outside of the nose, such as a blow to the face or repeated irritation from picking or the cold, are the most common causes of a nosebleed.

Most nosebleeds are not dangerous, but more severe ones can cause dizziness, light-headedness, confusion and fainting.

If you experience a nosebleed, follow these six steps:

1. Pinch the soft parts of the nose together with the thumb and forefinger.
2. Press the pinched part of the nose toward the face.
3. Lean forward slightly with the head tilted forward.
4. Hold the nose for at least 5 minutes.
5. Sit quietly, making sure the head stays above the heart. Do not lie down.
6. Apply ice to the nose and cheeks.

While most nosebleeds can be handled at home without the need for medical attention, it is important to know when you should seek medical care.

If you would like more information on nosebleeds or would like to schedule an appointment with an ear, nose and throat physician, contact Sacramento ENT at 916-736-3399.