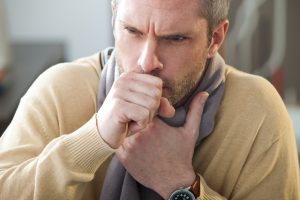 Cough is one of the most common reasons that Americans visit their doctors and it accounts for roughly 30 million unique health care visits per year, or about 8-10% of the population.  When asked in surveys, most people will report that a typical viral-associated cough will last for about a week.  However, scientific studies show that the average duration of a cough due to the common cold is more likely to last around 18 days.

Cough is characterized in a variety of ways but time course is probably the most helpful way to think about causes.  Acute cough is usually caused by viral colds and lasts less than three weeks.  Subacute cough lasts between 3-8 weeks and is due to a hyperactive airway secondary to otherwise resolved infections.  Chronic cough is a cough that is present for greater than eight weeks.

Chronic cough is most commonly caused by post-nasal drip, gastroesophgeal reflux or pulmonary issues.  Post-nasal drip can be caused by nasal allergies and chronic sinusitis.  Mucus drains from the sinuses, down the back of throat causing irritation and cough.  Allergists and otolaryngologists (ENTs) diagnose the reasons for post-nasal drip by taking a history, performing a physical examination and using allergy skin testing and imaging of the sinuses where appropriate.  Treatment can range from environmental avoidance to medications to lessen or remove mucus in the sinuses.  Surgery on the sinuses is also sometimes an option.

Gastroesophgeal reflux (GERD) is caused by acid in the stomach coming back into the esophagus or even upper airway to cause a chemical irritation.  Diagnosis can be made just from listening to a patient’s symptoms such as experiencing a cough after laying down, burning in the esophagus, upset stomach, etc.  More definitive diagnosis of GERD is made from measuring acid levels in the esophagus or visualizing the esophagus or stomach by a gastroenterologist.  Treatment is primary behavioral by lifestyle changes (avoiding spicy foods, alcohol, fatty foods, limiting food/drink to greater than 2 hours before bedtime, etc) or the use of antacid medications.  There are even surgical options for very severe cases.

Pulmonary reasons are a common cause of chronic cough.  The most common causes are asthma and chronic obstructive pulmonary disease (COPD).  Other lung diseases such as cancer or autoimmune conditions are possible causes but are thankfully rare.  Diagnosis is via examination, pulmonary function testing and imaging of the lungs.  Treatment options include behavioral modifications as well as medical treatment using inhalers.

Sometimes, chronic cough is caused by a hyperactive series of nerve impulses after some damage to the nerves, usually from a viral infection or chemical irritation.  Patients with this form of ‘neurogenic cough’ have often been to many doctors without a definitive diagnosis or significant relief.  The good news is that there is emerging consensus among doctors for treatment of the symptoms of chronic cough even if a definitive diagnosis cannot be made.

Dr. Matthew Bowdish at The Allergy Center at SacENT is a board-certified allergist/clinical immunologist who has an interest in treating patients with chronic cough, especially challenging cases of cough.  Dr. Bowdish’s opinion is that most cough can be diagnosed if you really listen to the patient.  He also follows a systematic ‘cough center’ approach to diagnosis and treatment and he often works with other providers to coordinate care for those with chronic cough.  Ultimately, Dr. Bowdish believes that no one should have to suffer from chronic cough given the many options for treatment.

Dr. Bowdish can be reached for an evaluation of your chronic cough by calling The Allergy Center at SacENT at 916-736-6644.