Dr. Ow joined SacENT in 2002, after serving seventeen years with the Air Force, where he left at the rank of Lieutenant Colonel. Dr. Ow received his bachelor’s degree from the University of Hawaii and his medical degree from the Uniformed Services University of the Health Sciences in Bethesda, Maryland. He graduated with honors from medical school in 1989.

Dr. Ow served tours of duty with the Air Force in Korea and Okinawa before returning to San Antonio, Texas where he completed his residency in otolaryngology head and neck surgery at Wilford Hall Medical Center. He served as Chief of Otolaryngology for the 3rd Medical Group, Elmendorf AFB, Alaska from 1998 – 2002 before coming to Sacramento.

Dr. Ow earned his wings as a flight surgeon in the Air Force and was assigned to a pararescue squadron in Okinawa, Japan. He also held credentials as a hyperbaric dive medical officer and ACLS instructor. He was awarded several military decorations including being voted “Physician of the Year” by his colleagues at the 3rd Medical Group in Anchorage, Alaska.

Since arriving in Sacramento, Dr. Ow has established a busy clinical practice in addition to collaborating with pharmaceutical companies and medical device companies on numerous projects, including research and clinical trials. His particular clinical areas of interest include sinus disease (including balloon sinuplasty), allergic disorders, thyroid and parathyroid surgery and pediatric ENT disorders.

Dr. Ow is committed to offering patients both traditional and advanced treatment options. He specializes in minimally invasive office based procedures that offer patients new treatment options that in the past were limited to more invasive and costly surgeries. He is a Fellow with the American Academy of Otolaryngology-Head & Neck Surgery and with the American Academy of Otolaryngic Allergy.

Dr. Ow is married to Dr. Jacqueline Ho. Dr. Ho is an obstetrician-gynecologist (Ob-Gyn) with Associates in Women’s Health Care in Roseville, CA. They have four children – three girls and one boy. 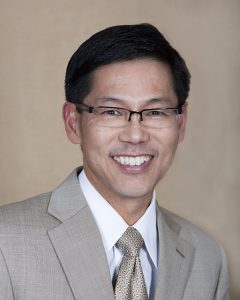